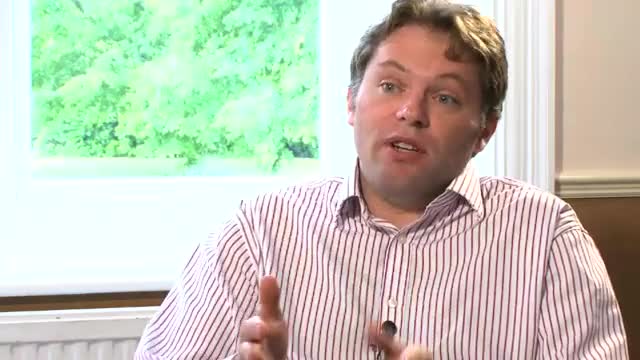 The key problem in the existing grid, really, is how we've become used to electricity. So we're used to flicking on a switch and there being electricity there, and we're used to paying for that electricity with just a flat tariff, so we pay electricity per unit. And that's completely different to the actual costs of generating that electricity. So at peak times, electricity is very expensive, it's very hard to produce, you need a lot of generation capacity that just sits there waiting for that peak time, and then when you move to a grid where it's renewable, if you've got wind turbines and it doesn't happen to be windy that day, then that's a lot of your capacity that's just gone. So if you're trying to make the grid where you can make proper use of supply when it's available, the key game changer is storage. You can do it a little bit by moving loads around. So at peak time you don't want to run energy-intensive appliances, or if you're a large industrial company, you don't want to be running pumps at peak times. So if you can move these loads around, that gives you one degree of flexibility.
Demand response is this idea that when electricity is expensive or when it's carbon-intensive because there's not much wind and it's all coming from coal-fired power stations, if you can delay using loads at that time, that's one advantage, and that's one way of reducing your carbon emissions. But the other real game changes is storage. Large utility scale storage has been around for a while in terms of pump storage. We pump water up to a reservoir and let it come back down again. And most countries have systems like that. But the game changer may be storage in our homes. So if you've got an electric vehicle, the battery of your electric vehicle will probably run your home for a day or two. So if you can move energy back and forth between your car battery and your home, or maybe you have a home storage battery, so maybe when your car battery is used up, you've used up its useful life for running your car but it's still got a lot of life in it, maybe that could be a home storage battery that could sit in your basement and then you can use energy from your battery when the grid is expensive or carbon-intensive and then overnight, when it's clean, you can be charging up the battery.
So it's this idea of demand response being able to move loads around, which you can do, but to a limited degree, but the real key idea is storage. So since you can store that electricity, then the grid doesn't have to look the way it does at all. The grid is designed the way it is because electricity is hard to store. They go to enormous lengths to insure that when you put the switch on, there's electricity there, and there's an enormous overhead to actually doing that. But if you can store the energy locally, that changes everything. But that's expensive. Batteries are expensive, but the technology is improving and the price is coming down.